Posted by Aleksander Knudsen on August 12, 2013

Creaza would like to welcome all students and teachers back to a new semester! We hope your summer breaks have been excellent, and that you've had time to recharge your batteries!

The first half of 2013 has been an exciting, eventful and hectic one for Creaza, and much time has been spent on the road. Creaza attended a number of events and conferences this year, among them BETT in London, SETT in Stockholm, and NKUL in Trondheim. 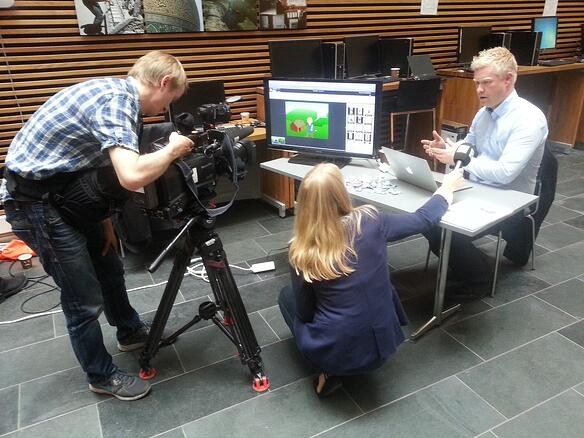 Upgraded website and new Cartoonist theme
At the end of January, Creaza underwent a major upgrade. A new and improved version of Creaza's website was launched. Among the improvements, we can mention that users now are able to change the language of the entire website by clicking on the flag in the top menu. This is a great resource when learning a foreign language. In addition to the website’s new design, a brand new Cartoonist theme called «Future Globe» was added, as well. This theme lets the students create futuristic cartoons about how they envision that the world might look like in the year 2050. How will energy be provided? What effects will climate change have caused? What kind of technology will people be using? These are just some examples of issues that can be explored and presented when using this theme.

Autosave
Creaza recently introduced autosave for all our tools, which means that a user's work is automatically saved one minute after a change has been made to a product. This function has been added to ensure that no work will be lost as a result of loss of Internet connection or other unforeseen incidents. Users can of course still save their work manually, as well.

News editing with TV 2
During the summer break, a lot of Norwegian students took advantage of the many different activities provided by Sommerskolen Oslo (Oslo Summer School). One of the activities was a crash course in news editing. The course was held by TV 2, a Norwegian TV channel, and the students used a specially made theme from Creaza's MovieEditor in order to edit a selection of news clips from TV 2's archives. The sudents initially got an introduction to what it's like to work with news broadcasting. TV 2 Skole showed examples of how TV 2 Nyhetene (TV 2 News) go about telling a story, before the students themselves were asked to put together their own news segment. Below you can see an example of one of the news segments:

In a Norwegian middle school, the students were making movies in Creaza in their French lessons. One of the students, Anita, made this film about Paris:

Creaza Mindomo can be used in every subject and at every grade level. Before the summer break, Cornelia, a Norwegian high school student, used Mindomo for her presentation on her very last exam, an oral exam in Norwegian. She had never used Mindomo prior to this exam, but wanted to try something new and different. The examiners were impressed with the tool she had chosen, which they said was a different and creative way of presenting the material. This, combined with the content and the presentation itself, resulted in Cornelia receiving the highest possible grade, which in a Norwegian high school is a 6, equivalent to an A. You can see the presentation below:

New Creaza portal
Creaza is currently in full swing with developing our brand new Creaza portal. We will mainly be focused on making it even easier for teachers to use Creaza in the classroom. Therefore, a large collection of assignments and exercises will be added to our website. Teachers will be able to find and assign exercises, which the students will then be able to open, answer, and hand in, all through Creaza's website. The teacher can them comment and/or approve the exercise. In addition to working on exercises individually, different students will also be able to collaborate with each other on the same product from differnt computers. The new Creaza portal will be launched towards the end of 2013. More detailed information on this to come in the near future.

Written by Aleksander Knudsen
I am the support manager in Creaza, and I know all there is to know about how Creaza is working. I have been working in Creaza since 2012.
[fa icon="twitter"]