After a long time of developing, Creaza 3.1 was released friday March 19th in the evening.

In addition to all over better performance, there are many higlights in the new release. Some of these are: 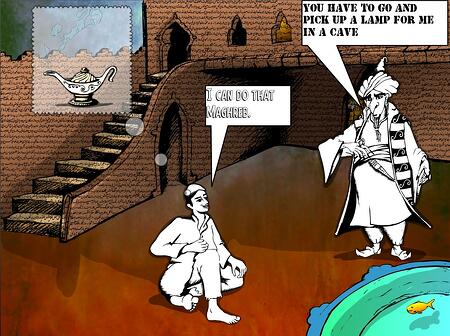 Fileuploader
Improved file uploader in the Portal with better GUI, showing the user progress on each file both in uploading and storing/converting.

Grouping objects
Group/ungroup objects in Cartoonist. You may now group several objects in the slide and threat them as one.

More than one video layer?

Earlier, it was possible to add images (jpg, gif, png) and flash files (swf) to a graphics layer. With Creaza 3.1 it will also be possible to add animated gif-files and video-files (both from the thematic univers and from ”My mediafiles”. All the files added to a graphic layer can be scaled and rotated, and you can have more than one on each track.

Add markers
The ”Add marker”-feature is enhanced. You can make as many markers as you like, and you can make them relative or lock them to a videoclip. From the toolbar you can choose to skip from marker to marker.

Arabian Nights (1001 Nights)
This brand new Cartoonist theme is made in a completly different style. This theme is made with a persian style, and have the backgrounds, characters and props to tell two stories from 1001 nights: "Alladin" and "Ali Baba and the 40 thieves"

New "World City"
We have added a new city to this theme. Berlin is now one of the world cities in Creaza.

Global Village
In "Global village", we have added more video clips in the ”Transport”-section.