Friday September 11th AudioEditor was released - Splice together your own version of a newscast, a radio commercial, or a radio interlude. Make your own sounds, clip, trim and cut in one or more tracks and play it back later.. 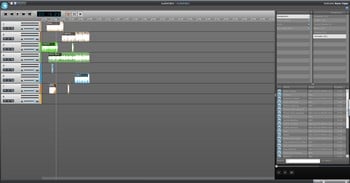 From the tools Mindomo and Cartoonist you can now export your products to high resolution PDF for print. See example of an exported Cartoon here:

MovieEditor has been brusched up and a lot of new functionality is launced. You can now import your Cartoons into MovieEditor and then record your own sound or put in musicclips from the library. This may give your cartoon or movie a whole new communicative side.. In MovieEditor the library of video- and musicclips is rebuild and has a more navigationfriendly appereance..

When you insert music or soundeffects in your movie you now get audio curves on all your clips. This makes it easier to mix sound and get that perfect sound to your movie.

On all tracks you now have the opportunity to trim your clips directly on the timeline. In MovieEditor it is also made possible to use hotkeys on your keybord. Some of these are;

A new Demovideo of the MovieEditor is also avalable. You can access it from the new Helpcenter in Creaza.. Click on the image below..