"The new MovieEditor harnesses the power of Flash 10.1"

Creaza has visited a lot of existing users and met new users in different countries throughout the spring. At the same time, our developers have been working very hard so that Creaza can offer you even more technological possibilities, all over better performance, and exciting new content.

Creaza will soon launch a preview of the new MovieEditor!

There is a lot of debate regarding the use of Adobe Flash. We've decided to launch a preview of MovieEditor as an open test bench for the new Flash Player 10.1. You will have the opportunity to evaluate for yourself what can and can't be done using Flash! Steve Jobs has labelled Flash as old technology. Apple claims that Flash is an obsolete CPU hog, and that developers should consider reaching out to the open Web standards of the new HTML5, CSS, and JavaScript instead. Adobe says Apple's technology complaints are a smokescreen. Adobe has taken measures to increase performance, and Flash will continue to innovate and expand the limits for what is possible on the web.

While Flash as a video player for the web may or may not be threatened by HTML 5, the launch of Flash Player 10.1 provides an opportunity to move the front to the next level. When the new Flash Player is released we will show you that video editing in the cloud has no limits.

Let us be clear: Flash Player 10.1 rocks! We will post an update when the Flash Player 10.1 is released. The new MovieEditor is scheduled for August 2010. You will be informed about the site for the Technology Preview on our Blog. 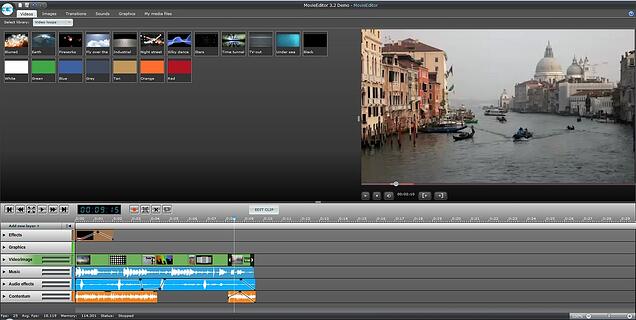 Exciting times on the web if you want to be creative!